The earthquake of 9.0 that struck Northern Japan on March 11, 2011, and the terrible tsunamis that followed is something I have been watching with horror along with everyone else, seeing that entire villages have washed away in some places, with unimaginable destruction all along the coast. As of this writing, 27,000 people are missing or dead, and now, with the man-made nuclear catastrophe unfolding at Fukushima where the situation seems to grow worse every day, it looks very possible that a huge region of the country could become uninhabitable. The sheer size of this disaster and the horror of it has brought home the fact that even a very wealthy country like Japan can be brought to its knees by a sudden act of nature, and I’m reminded that we are all temporary guests here at best.
Japan has been good to other nations in times of crisis or need. Having been born and raised in a poor country, Nepal, I am well aware of how much money Japan has given to Nepal. Japan has donated much money for the restoration of Lumbini, the birthplace of the Buddha, and many temples restored in Kathmandu would have crumbled if not for the generosity of Japan.
When the earthquake happened in Haiti last year, the Tamang community in Queens took up a collection to give to the Red Cross. It was a relatively small contribution, but one that we felt might make an impact in place already so poor. I think we probably felt a certain economic equality with that country, and before today, I don’t think anyone imagined seeing a time in Japan where people don’t have enough food or warm clothes, as we are seeing now on the news.
I know that after World War II Japan suffered terribly, two of its cities were wiped out by the atom bomb, there was radiation of top of destruction and there was hunger in that country. Japan had to rebuild completely. I think back to the 1970s, when I first became aware that any product made in Japan could be counted on for excellence. I can’t think of any country that works harder or has such high standards as Japan. Everyone looked to Japan as a role model for efficiency, and hard work well rewarded. And so, this great tragedy unfolding is humbling to see, and a frightening reminder of how very vulnerable we all are on this little planet that we share. The situation is being compared to the days just after World War II in Japan, with similar destruction and radiation to fear as well. We’re all affected whenever any place on earth suffers a calamity like this.
I have lived in the United States since 1974, and I’ve been privileged to visit other countries as well, and to meet many people. But over the years, I’ve often thought of a particular Japanese man who I met in the early 1970s in Kathmandu, when I worked at the Panorama Hotel. His name was Mr. Nakamura, and whenever his business brought him to Kathmandu, he would stay there and I would serve him breakfast in the hotel dining room. I didn’t speak much English then, and I think if I had I would have learned a lot more about Mr. Nakamura. He was a very kind person, always pleasant and warm towards me. He was missing an arm, although I don’t remember which one it was. One day he made me a gift of one of his very fine white shirts. It was a real luxury for me to have such a shirt, and I’ve remembered that many times as an example of Japanese kindness. If he’s still alive, Mr. Nakamura would be an old man now, but I’ve thought of him in these last weeks and hoped that he and his family are safe. I pray that the souls of all those many people lost in this will find peace, and that their survivors will find the courage to rebuild and keep on living, the way their countrymen did after the war. Japan is a resilient nation, but right now it also needs help from other nations, rich and poor alike.
I think many people who don’t have a lot of money feel embarrassed to give small amounts, especially in the face of a crisis this big, and so they give nothing.  But I can only encourage people to ignore that feeling and give anyway, because even as little as a dollar will add up to a lot when many people give, and help is help. I intend to make a small donation as a gesture of good will, and I have chosen to make mine through the Japan society. If anyone is unsure of how to give, I would suggest this as a good way. The Japan Society has created a disaster relief fund to aid victims of the recent catastrophe. 100% of contributions, which are tax-deductible, will go to organizations that directly help victims recover from the devastating effects of the earthquake and tsunamis. The Japan Society is investigating and vetting organizations that can make the maximum impact, both in terms of immediate relief needs as well as the longer-term recovery process.  If you would like to give a donation or learn more, please visit their web site:http://www.japansociety.org/earthquake 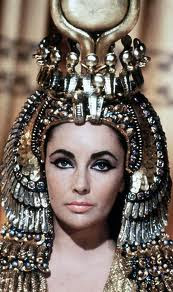 March 26, 2011
Once in a while I feel inspired to pay tribute to a person who belongs to the world, and today I want to write a little something to honor Elizabeth Taylor, who has just passed away. Cleopatra, with her in the starring role, made a big impression on me, and from the moment I came to live in this country, I was always aware of Elizabeth Taylor. In my many years of living in the Dakota, I was fortunate to meet a great many actors and actresses, writers and artists, but I never had the privilege to meet her. I did, however, have many encounters with Tennessee Williams, and knew that she had starred in his Cat on a Hot Tin Roof. When I type her name into the computer to look at images, up come countless pictures of her. She was beautiful, and she was a very fine actress, one of the last of a certain type of star that there don’t seem to be too many of left. But more than for her beauty and her talent, I admire Elizabeth Taylor for the kind of life she lived and all that she gave of herself beyond movie making. As an activist and someone who truly seemed to love people, she did immeasurable good. I remember very well a period when so many people were getting sick with a mysterious illness, one that took the lives of a lot of artists and actors, and that many people were very afraid of it. Elizabeth Taylor did something monumental when she stood by Rock Hudson when he was ill and made AIDS her personal cause. She took away the stigma of that sickness and helped to fight it, perhaps more than anyone else. I admire her activism and her great devotion to her humanitarian efforts as much as I admire her long and wonderful career.
In memory of Elizabeth Taylor 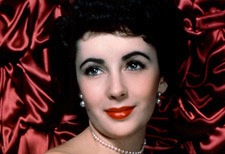