The Man with the Colorful Suits
Remembering Shail Upadhya

Last week I received a telephone call from Mridula Koirala, the representative of the Nepali Congress Party in North America. She told me that on Thursday, January 31st, our mutual friend Shail Upadhya had very suddenly died. Mridula was close to him and she is what we Nepalese would call his God Sister. As such, she would have the honor of draping his coffin with the Congress Party flag at his funeral, since he too was a member of the party. Knowing that I’m a photographer, she asked me to come and document the funeral with my camera. I agreed, and my wife Radhika and I along with Bansha Lal Tamang, Bhoj Raj Thokar and Ang Chhering Sherpa attended the funeral, which was held this past Sunday at Frank E. Campbell Funeral Chapel, on 81st and Madison ave., Manhattan.

Shail Upadhya was for many years an official at the United Nations, and after retiring, he devoted himself to designing suits and hats, a vocation he worked at right up to the 2012 Fashion Shows here in New York, which he attended to debut his “Fireworks Pants.” The pants were written up by Alec Wilkinson for the New Yorker on September 5th, 2012: “The pants are red, with displays of fireworks painted on them and there is only one pair,” Wilkinson wrote. “Upadhya, who is seventy-eight, designs single-edition, hand-painted clothes, mostly suits, which are only for himself.”
The fashion photographer Bill Cunningham considered Shail one of the great stars of the street. Writing in Forbes magazine, (March 17th, 2011) Raquel Laneri nominated as her favorite of Cunningham’s chosen style gurus Shail Upadhya, “a retired U.N. official from Nepal who wears brightly colored jackets, plaid skirts, bold prints and loud newsboy hats — often all at the same time.”

I will never forget the first time I met Shail Upadhya. The meeting took place in Kathmandu forty years ago. I was working for Charles Henri Ford and living in the house he had there, which I now own. Charles and Shail had already been friends for years by 1973. They knew each other in New York. I’m not sure in what capacity he served at the United Nations, but he was a polished and important person. He too kept a house in Kathmandu, and while he was there, Charles invited him to lunch one day. Shail Upadhya arrived with a pretty young Korean girlfriend on his arm, and I prepared and served lunch in the garden. Shortly after, he invited us to his house in Bishalnagar for lunch. Charles and I went there, where he introduced us to his family. I could not have possibly have imagined on that day that the next year I would come to New York and that forty years in the future I would speak at the funeral of this personable diplomat sitting in the garden. I remember being invited with Charles to visit Shail at his house in Kathmandu, where he introduced us to his mother and brother. Once I was living in New York, whenever I ran into him he was very friendly. He would always ask,  “Are Ruth and Charles treating you well?” And I would always tell him, yes, they were.

In 1975, Charles had an exhibition at the New York Cultural Center on Columbus Circle. Mario Amaya was the director, and Charles exhibited sculptures and wall hangings and all kinds of work that he had created in Kathmandu specifically for the show.  It was through Charles’s connection with Shail that the Nepalese Ambassador to the U.N. at the time, His Excellency Shailendra Kumar Upadhyaya, was not only invited but came to cut the ribbon opening the exhibition. Charles and I wore Nepalese dress for the occasion, which was a huge success. For years after, Charles would talk about how crowded the opening was. It was something that made him very happy.

While he was at the U.N. in the 1970s, Shail often came to visit us at the Dakota and we would visit him at his place. He lived at number 20 Sutton Place. I remember being there for dinner and drinks, and he had a cook preparing the dinner. There was a young man staying there at the time who, Shail told us, was on his way to Texas for pilot training. Politicians often visited from Nepal, and while he was a member of the Congress Party, Shail very generously welcomed and accommodated in his home Nepalese politicians of every affiliation.

Thanks to him, Charles and I got invitations to all kinds of events and functions at the U.N., such as the King’s birthday, which was a very fine dinner party. The U.N. doesn’t do events like that anymore, I don’t think, nor do we have a King anymore. Whether they stopped for security reasons or otherwise I don’t know, but I really had my share of privilege going to those functions at the U.N. I would take my camera, the way I used to take it everywhere, and someone I photographed at one of those functions was Kurt Waldheim, the Secretary General of the United Nations from 1972 to 1981. Of course, that was before he returned to Austria and all the dirt on him was discovered, resulting in the scandal which came to be known as “The Waldheim Affair.” Somewhere I still have that photograph. 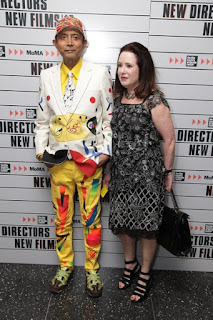 In the 1980s, Charles and I would often run into Shail at gallery openings and receptions. He loved all those happenings and events just like we did. It was after he had retired, in the late ‘80s, that he started designing his own fashions. He would get reviewed in the New York Times for his suit designs using patch-work quilts, awning materials, and all sorts of other fabrics. Some people thought he must have been crazy. He was in London in the ‘60s with his Ambassador parents when the Beatles were just starting there. They must have had a big impact on him. When he started designing his attire, he made some clothes using a doodle that John Lennon did stamped all over the fabric. He made all kinds of crazy suits and hats, which he himself wore, and because of that he was nothing if not colorful. He had houses in Southampton and in Florida and I remember gossip from the ‘80s about all the different girlfriends he supposedly had, who would pop into his life to enjoy the luxury surrounding him and then leave. If that is true, I never got the impression that he minded, but rather that he was a man who completely enjoyed his freedom.  He did have one girlfriend who I think was very special to him, though, named Karen. I met her once, and she gave me her card. She was in real estate. She died of breast cancer five or six months ago, and at the time of his sudden death, Shail was still mourning hers.

There is an online Nepali radio station in Queens which has been on the air a few years now, with an interview show called “Life Journey,” and once I followed him in being interviewed for that program. The radio interviewer asked us to tell the story of how we came to be in America. I talked my journey and he talked his. He couldn’t have had a more interesting life.

Shail and Charles remained good friends for the rest of Charles’s life, and after Charles died, whenever I saw Shail, we’d always stop and talk. I ran into him at the Rubin Museum one evening and he told me about being unhappy with the way some of his family in Nepal had treated him. I got the impression that he was not planning to leave them anything in his will, and from what I hear, a lady friend of his ended up being his heir.

A few months ago I called him to tell him I’d like to invite him over to our house in Queens for lunch or dinner one day soon, once we had gotten ourselves situated after we moved upstairs.  He said he would definitely like to come. But unfortunately, it didn’t happen. When Mridula told me that Shail passed away it was bit of a shock since he wasn’t particularly old. But I suspect that he neglected his health somewhat.
At his funeral I said to her, “I brought my camera.” And she said, “Use it.” So I took photographs of his friends delivering eloquent eulogies, people who had known him as far back as the ‘90s and the ‘80s, and then I went to the coffin. He was lying with his hands folded, and I photographed him and also his hands. Then I saw that on the floor beside the coffin was a pair of empty shoes. They must certainly have been his, I thought, and I photographed them as well.

That’s when I noticed a young woman, gesturing at me to take no photos. I apologized and stopped. I thought perhaps she didn’t want photos of herself, so I took photos from another direction. Then she came and very firmly told me to stop taking photos and that Shail’s family members did not like my doing so. When I told her that I had been asked to take photos by Maridula Didi, she reluctantly said, “OK. Go ahead.” It put me in an uncomfortable position, one of looking like an interloper with a camera. So, although I had told Mridula that I didn’t intend to speak, I signaled to her that I would speak after all. And I went up to the podium and told the story that I’ve just told you here. 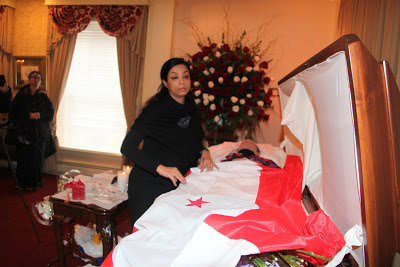 Mridula draped the Nepali Congress Party flag over Shail’s coffin and I photographed her doing so and later emailed them to her. A couple of days later, I ran into her and told her about the objections I got to my taking the photographs. I suppose the objections bothered me somewhat. Funerals are sensitive when it comes to photos. On one hand, it’s a memorializing of a person, and on the other hand it’s an affront, depending on one’s opinion. It is the last chance you have to take a picture of a deceased person. Once the corpse is gone, the opportunity is gone forever. But like it or not, the picture is there to see later. I think in the long term, such photos are cherished. I felt the same quandary when Charles passed away. It was such a very sad moment, I remember. What about a picture? Should I take one? I weighed it in my mind and I thought if I don’t, I might regret it forever. I would not be taking it just for my gain, but for everybody to see. That’s the way I see it. I wasn’t trying to gain anything for myself in taking the photos of Shail. I took them as a record. That’s what it is, a final record, and I will make CD with the photographs s for anyone who might want them.

When I spoke at the funeral, telling about meeting him that day in the garden forty years ago, I said that Shail Upadhya came to New York first, and the rest of us followed from Nepal. Now he’s gone on to find a new place, wherever it may be, and eventually all of us will follow him there too, from wherever we are here.