Early August, with my wife and daughters, Juneli and Zina we drove from New York to Mississippi.  In the car with us we also had Ruth and Charles, at least their ashes, which we were taking to bury in the cemetery in Brookhaven, Mississippi, close to their parents, Charles Lloyd (September 2, 1871-April 9, 1949) and Gertrude Cato Ford (Sept 27, 1886-January 28, 1956), as well as their grandparents, Charles Wesley Ford and his wife, Nancy Elizabeth. The headstones for Charles and Ruth had been ordered by Karin Gustafson, who flew down to meet us for the burial on August 9th.
Charles’s stone reads: ‘Here lies Charles Henri Ford, Sleeping Through His Reward, Feb 10, 1908-Sept 27, 2002, Author – Artist’. Ruth’s stone reads: ‘Ruth Elizabeth Ford, Beloved wife of Zachary Scott, July 7, 1911-August 12, 2009, Actress—Muse’. People are often puzzled by the actual ages of Ruth and Charles, including journalists, because both Ruth and Charles took a few liberties with their birthdates during their lifetimes. But their true birth dates are reflected on their tombstones. 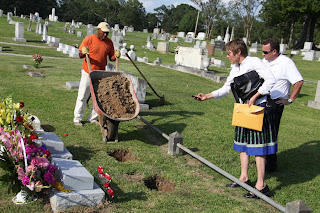 We buried their ashes, all of Ruth’s and half of Charles’s, while Karin read some verses of Walt Whitman. I was too teary to read anything. According to Charles’s wish the other half of his ashes will be placed next to Pavel Tchelitchew in Pere Lachaise cemetery in Paris, a trip I will make sometime in the not too distant future. 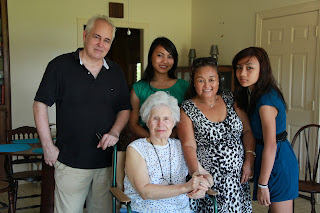 We stayed in a hotel in Jackson where we visited a longtime friend, the artist and professor of photography, Allen Frame. Most of the time he lives in New York, but he was born in Mississippi and happened to be in Jackson visiting his mother when we were there. Allen and Charles met in New York, and he was a very big part of Charles’s house, visiting him almost every day. Although Allen is much younger than Charles, they had Mississippi in common, both of them were born there. Allen’s mother enjoyed showing us around the property where she lives which was full of trees. While we were there, Allen took us to the town of Natchez, Mississippi, and we had a tour of one of the old Southern mansions there. On the day of the burial, we all drove to Brookhaven, about an hour away from Jackson, and Allen made a video of the day.
I often heard Charles and Ruth mention Mississippi, but I had never been there before. I don’t think either of them made many trips back after they’d left, either.  As far as I can remember, Charles only made one trip back to Mississippi to bury one of his parents. In Ruth’s New York Times obituary, an interview she did with After Dark Magazine in 1974 was referenced, in which Ruth talked about first coming to New York to visit Charles. “My brother had all these strange, wonderful people around him,” she said. “And once I had seen them, once I had seen New York, well, what the hell was I going to do in Mississippi? Marry a shoe salesman?”
Both Ruth and Charles were born in Hazelhurst, Mississippi, a little town very close to Brookhaven where their parents ran the Ford Hotel for some years. We went to look at site of the old Hotel at 132 West Green Street in downtown Hazelhurst where Ruth and Charles were born. The original building burned down after World War One, and the two-story brick building that replaced it was in complete disrepair with windows boarded up and “No Trespassing” signs. A photograph of the original hotel can be found online at “Elmo Howell’s Mississippi scenes: Notes on Literature and History.”
What I heard from Charles over the years is that his parents ran several hotels in several states including Tennessee, Texas and Louisiana. Charles said that he and Ruth were spoiled by moving around to different hotels when they were children, and they were more privileged than some of their peers in the freedom they were given. I often heard Charles repeat to interviewers that he was conceived in New Orleans while his parents were honeymooning there.  I don’t remember hearing Ruth say much about their childhood, but then again, I spent more time with Charles, and whenever someone came to interview him, which was often, I would hear him tell the stories about his childhood.
In 1929, at age of sixteen Charles famously dropped out of high school to start his first magazine, Blues: A Magazine of New Rhythms, in which he published works by Gertrude Stein, Edouard Roditi, Erskine Caldwell, EE Cummings, Ezra Pound and others. That was the beginning of his long career of collaborating with others on all kinds of projects. He lived in Paris and New York during the 1930s and made it easy for Ruth when she came to New York by introducing her to everyone he knew. Ruth already had influential friends of her own, most notably William Faulkner, whom she had met at the University of Mississippi. Ruth and Charles always enjoyed an active social life, and they mixed work and social life together very easily. I was lucky to meet many interesting people through them.
On the way back to New York we stopped to visit Maude Schuyler Clay, a longtime friend of Ruth’s, in Sumner, Mississippi. She and William Eggleston are first cousins. Her mother and his mother were sisters who grew up in the very house in which she lives now with her husband and three children. The house was beautiful and full of beautiful furniture, the kind of furnishings that have stories attached to them, and interesting taxidermy. There was a white raccoon. Maude gave me a copy of her book of photographs, called Delta Land, published by University Press of Mississippi, which was full of very lovely pictures of the surrounding area. While Ruth was still alive, Maude had written many letters to her and was always a loyal friend, so I decided to call her while we were there, and I’m glad I did. 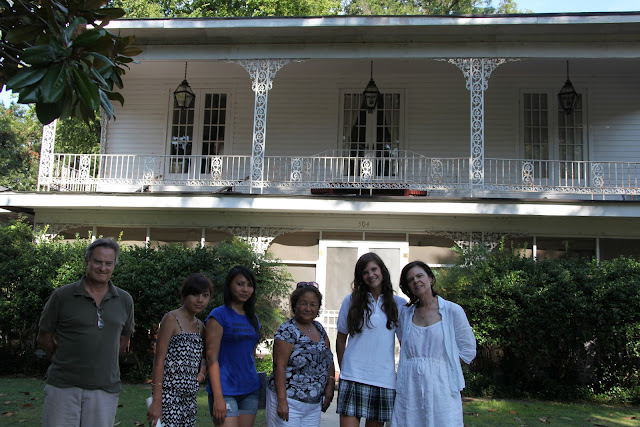 After visiting Maude, we drove as long as we could for the day and spent the night at a Ramada Inn in Jackson, Tennessee. The next day we made Athens, Georgia, where we visited a Nepalese friend who works as a researcher for bio-fuel made from corn. From there we drove to Maryland, where we stayed with family friends. Finally the next day, it was home to New York. We left on August 5th and got back on August 13th, nearly 3000 miles later.
Not long before I took the ashes down to Mississippi, Ruth’s apartment in the Dakota finally was sold. Ruth always had the walls covered with art, and some of the paintings were by Gertrude Cato Ford, mother of Charles and Ruth. She signed her work “Cato.” After the apartment was sold, I went around taking paintings down off the walls, and I kept a number of them by Gertrude Cato. They are good paintings, but she didn’t become famous for them. In a diary entry Charles made in February 1951, published by Turtle Point Press as Water From A Bucket, A Diary 1948-1957, he wrote:
“In spite of Mother’s being a practicing artist and surrounded by artists—her ideal of success is a commercial success—she’s never developed beyond this idea—typically American. To posthumous glory, she’d choose present riches…”
In another entry from the same book, written in December 1951, Charles remembered their mother describing the night of Ruth’s birth:
“Mother told me of the night Sister was born. She left the dinner table, where there were guests in the middle of a meal, went in the kitchen and told the cook to put more biscuits in the oven, 45 minutes later she had her baby girl, the doctor arriving only 20 minutes before delivery. The guests couldn’t believe it was true!”
Radhika and Zina had been bugging me about how I never take them anywhere, so I thought this would be a good opportunity to both take Charles and Ruth home, and offer some adventure to my wife and daughter at the same time. The car that I had for so many years would never have survived such a long trip, so I bought a new Honda Pilot Touring car. We made the trip with the GPS set by Zina. It was the first big voyage for the car and in fact for me too. I had never driven farther than DC or Boston before this trip.

Ruth and Charles were always close, and it felt right to be taking them home to be buried. I never imagined when I first came here that one day I would be taking their ashes all the way back down to where they were born. They came out into the world, lived long lives full of adventures, art and life, and then when they died they returned to the place of their birth to rest. I felt that taking them there was my last duty in looking after them. Now that they are safe in Mississippi, where their journey started, I will do my best to enjoy the rest of whatever life has in store for me, always surrounded by the many memories and influences of Charles and Ruth.
September 18, 2011
Posted by Indra's Corner at 3:33 PM 2 comments: