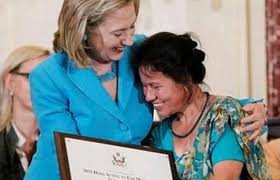 
Like many people, I was moved by the image of Charimaya Tamang being embraced by Secretary of State Hillary Clinton this week after being selected TIP hero of the year 2011 from Nepal. She was given this honor for her brave work against human trafficking, which has been a terrible phenomenon in poor parts of Nepal. I don’t know Charimaya Tamang personally, but she is nevertheless a familiar, and her courage and achievement are to be very much admired. She was born into a poor family, and after her father died, trafficked to India at 16 years old.


She spent almost two years enslaved in a brothel until the Indian government rescued her along with 148 other Nepali girls and women in 1996. When she came back to Nepal, she found herself an outcast from her own community. In the face of shame and loneliness she found the courage and strength to stand up to the traffickers by filing a case with the police. The District Court convicted eight people involved in trafficking because of her efforts. In 2000, along with 15 other trafficking survivors, she founded the group Shakti Samuha, an NGO set up to fight against human trafficking.

In 2007 she was given a national honor for this, and she sits on theNational Committee to Combat Human Trafficking, led by the Nepalese government that was founded in 2009.
The web site for Shakti Samuha http://shaktisamuha.org.np/ describes their purpose:
“Shakti Samuha is run by Nepali women who have been rescued from slavery including forced prostitution in India, and returned to Nepal. Having struggled to reclaim our own lives, we are reaching out to help other returning trafficking survivors, by providing shelter, legal aid, vocational training and counseling. We have also set up Adolescent Girls Groups based in the poorest communities in order to pass on the message about the dangers of trafficking. Now we are reaching out to rural districts where trafficking is prevalent, helping women make a united stand against the traffickers.”
As the father of three daughters, I commend these efforts of Charimaya Tamang to protect girls from having such a terrible thing happen to them and for the help she and her organization offer those who have already been trafficked and have returned home.

I congratulate her recent international honor, so well deserved, and hope that the attention will help with her very noble cause.
Posted by Indra's Corner at 10:22 AM 1 comment: