Not long ago, I posted a blog piece about Prime Minister Sushil Koirala, soon after he was elected. Now he’s in the world news again for having edged out José Mujica, the president of Uruguay, for the title of Poorest World Leader.

Both leaders are admired for their frugality and known for being truly concerned about the welfare of ordinary people. But even though President Mujica is reported to sometimes work without wearing any shoes, he does own a very old Volkswagen Beetle, which in 2010 had a value of $1,900. Prime Minister Koirala owns no car and his only property of any value are three mobile phones, one of which doesn’t work. His rejection of his own inheritance in favor of living a life of austerity and public service is considered the exception rather than the rule, since not many politicians anywhere appear to have an interest in following his example, or that of President Mujica.

The Himalayan Times, however, posted a different kind of article about one of Prime Minister Koirala’s activities in Kathmandu yesterday: the inauguration of a five-day Mahatma Gandhi Story Telling in the capitol, organized by the Mahendra Narayan Nidhi Memorial Foundation. During his inauguration, PM Koirala spoke of Gandhi’s commitment to  non-violence and peace. He stressed that movements of non-violence would bring about positive social and political changes, and praised the many people of Nepal who have chosen to follow that path as well.

If you want to find out about other Nepalese Politician’s Properties click link below:
http://www.opmcm.gov.np/np/property/

Posted by Indra's Corner at 6:57 PM No comments:

On the Passing of Leee Black Childers

On the Passing of Leee Black Childers

I don’t remember exactly when I met Leee, but it had to be soon after I came to America, which was in 1974. In 1976, Charles had a show called POSTCARDS TO CHARLES HENRI FORD at the Iolas Gallery at 52 East 57th Street. Leee was the person who took the photograph for the invitation. In the years to come I took several portraits of him, and he was a frequent visitor to the Dakota. Very often he came for tea by himself, just to sit and talk. He also sometimes brought punk groups with him to meet Charles, and if memory serves, I think he brought Marianne Faithful to visit one day.

In the 1990s, Charles took portraits of Leee as part of a photography series he made using projection. He rented a big loft on Greene Street for that purpose, and he’d ask whoever was coming to sit for him to bring slides along—their own work or something they liked—images which he would project onto the person and then photograph them. I think Leee brought slides of models he had photographed. After Charles photographed him, he gave him the contact sheets and the negatives so he could have prints made and Leee never returned them. So there are photos that Charles took of Leee, at least one or two contact sheets, somewhere in Leee’s archives. I just hope that all of his work will be preserved, by someone somewhere. You assume that it will be, but it’s not unusual for a person’s whole archive to end up in a dumpster. I hope his work will be preserved in a good place.

For a while, Charles and I saw a lot of him, and I’m quite sure we ran into him at Studio 54. I don’t remember him going around with a camera there. I think he mostly photographed people in the studio with his Hasselblad. That’s not the kind of camera you use to shoot on the street or in a club. I believe he used the Hasselblad to collect a lot of his stars back then, although I could be wrong about that.

At some point after 1980, Leee went to London for some years, and eventually he came back to New York and began all over again. He would take photographs of celebrities and up-and-comers both. I remember running into him at the Limelight one night. Charles and I sat down with him and a blonde lady, who he introduced as his wife. He was a character. I remember running into him on 57th Street one day—I don’t recall now whether it was before or after Charles passed, but I ran into him on the street and he was wearing two completely different shoes on his feet. One foot with one colored shoe and the other with another. Since that I’ve wondered about what it signified. I’m sure he did it on purpose and I still wonder: what was the significance of that? I’d like to ask him, but now he’s gone.

I wish I had seen more of Leee. Charles liked him very much and I did too. We enjoyed his outgoing, friendly personality.  It was through Andy Warhol that we came to know him. Meeting Andy and the Warhol crowd was how Leee got his first opportunities to photograph all those people that he did, and in the collection Charles kept of postcards sent to him over the years is one from Leee: a portrait he took of Jackie Curtis posing as if ‘waiting for someone,’ you know, the way I used to see girls ‘waiting for someone’ along 42nd Street.

Today I dug up the old invitation to Charles’s show at Iolas—a postcard—with the  photo Leee made of a crowd of people, including Ruth Ford, Ned Rorem, Holly Woodlawn, Charles, myself and quite a few others, and the message: “Having wonderful time—wish you were here! Charles Henri.” 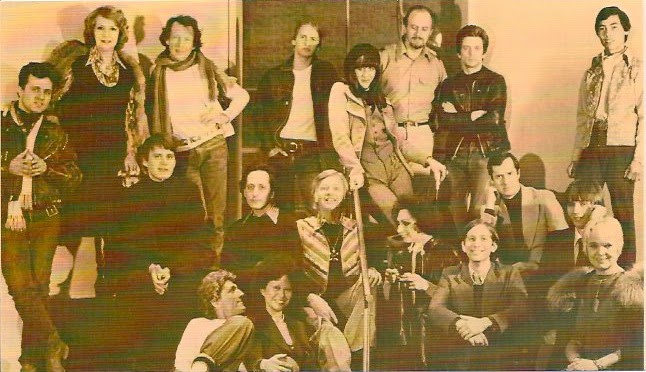 Quite a few of the people in that photo are still with us, but it feels like many of the people we knew in the ‘70s, ‘80s and ‘90s have been dying like flies lately. It was always wonderful to be in Leee’s company, and although we hadn’t been in touch for some time, I was very sorry to learn that he passed away. I will keep him in my memory.